Chia seeds impart many health benefits, some of which include controlling diabetes, lowering cholesterol levels, improving the digestive system, boosting heart health, controlling hypertension, and they even contain anti-inflammatory properties.

What Are Chia Seeds?

Chia seeds come from the chia plant, which is native to Mexico and Guatemala. The scientific names of the plant are salvia hispanica and salvia columbariae. They both belong to the mint family (Lamiaceae). Chia seeds look similar to sesame seeds. They are very small and dark. This plant has been known to humans for a very long time. The chia plant had been cultivated by the Aztecs, Mayans, Incans and other tribes for a very long time. It was a staple food for them and historians considered it an important plant and food source for Native Americans. With the fall of the Aztecs and the general decline in the native population in the North American region, the use of chia seeds also declined.

By the end of the 19th century and the beginning of the 20th century, wheat and corn had replaced chia seeds as the crop of choice. This change in the staple food can be attributed to the travelers from Europe colonizing the New World and bringing forth their food grains like wheat, rice, corn, potatoes, and sweet potatoes.

Thus, the general preference of food changed over the years. As a result, the remaining Native Americans abandoned their ‘old food’ and took up ‘new food’. Chia seeds had been forgotten for a long time until recently. The beginning of the 20th century saw a revival of chia seeds as more and more people started knowing about chia seeds and their benefits.

According to the National Nutrition Database for Standard Reference, 100 grams of chia seeds contain 6 grams of moisture, 486 kcal of energy, 16 grams of protein, 30 grams of fat, 42 grams of carbohydrates, 34 grams of dietary fiber, 630 mg of calcium, 7 mg of iron, 335 mg of magnesium, 860 mg of phosphorus, 407 mg of potassium, 16 mg of sodium and 4 mg of zinc. Chia seeds also have vitamins such as vitamin C, thiamin, riboflavin, niacin, and vitamin E. Chia seeds also have no cholesterol.
Chia seeds are good sources of antioxidants as well. Chia seeds reportedly contain very high concentrations of omega-3 fatty acids, which have many benefits in terms of healthy aging.. The antioxidants present in chia seeds include flavonol glycosides, chlorogenic acid, caffeic acid, kaempferol, quercetin, myricetin and linolenic acid. These antioxidants help in curbing the levels of free radicals in the body. 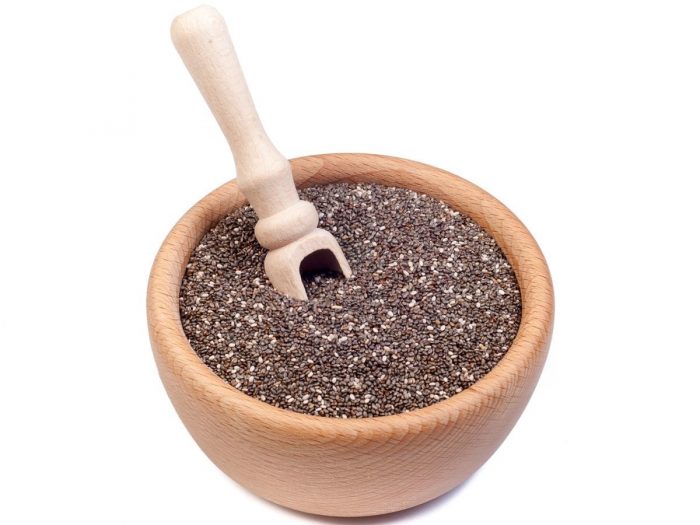 The starches and carbohydrates present in chia seeds are released slowly in comparison to conventional diets and are therefore ideal for diabetics as blood sugar level would not surge soon after having meals. A slower release of sugars into the blood stream can aid in optimum absorption of these sugars by each of the cells in the body. Hence, it is believed that the need for insulin diminishes.

Chia seeds are a good source of omega-3 fatty acids, apart from certain types of fish. Omega-3 fatty acids are essential fatty acids required by the body and help to enable many bodily functions. They also help in controlling arthritis, osteoporosis, age-related dementia, and fatigue, among many other conditions.

The amount of calcium found in chia seeds is considered to be higher than what is found in skimmed milk. Therefore, having a handful of chia seeds daily is recommended to eliminate calcium deficiency. Calcium is needed for improved bodily functions and for bone and dental health as well, helping to reduce osteoporosis, joint weakness, and general body flexibility.

Chia seeds have a high amount of dietary fiber, good protein content, moderate levels of carbohydrates, and omega-3 fatty acids. These nutrients, when combined, can play a significant role in keeping a person’s weight under control in the long run.

Chia seeds are considered as heart-friendly food. The reason is that they are the richest source of omega-3 fatty acids in the vegetarian world. Omega-3 fatty acids are the good fats that protect the heart and prevent the onset of heart disease by reducing the levels of omega-6 fatty acids (bad cholesterol) and maintaining a stress-free cardiovascular system.

The regular consumption of chia seeds is found to have a similar impact as regular medications for hypertension. The results of a study showed that chia seeds controlled systolic blood pressure by 6 ± 4 points. It also attenuates emerging and major cardiovascular risk factors in people with controlled type 2 diabetes.

Chia seeds can be soaked in a glass of water and consumed the next morning with breakfast.

They can be added to various drinks, juices, protein shakes, and milk shakes as a healthy component.

Chia seeds can also be sprinkled on various foods in your breakfast, lunch, and dinner.

They can be added to eggs to make a healthy omelet or added to salads as dressings.

Add a handful of chia seeds to milk and boil the mixture for some time to have a healthy porridge.

Chia seeds can be ground up and the powder can be added to flour, milk, and yogurts.

Chia seeds added to stews can make them thicker.

Recently, a study conducted by Ayerza et al. on poultry suggested that feeding these animals with chia seeds as fodder would be better. An increased intake of omega-3 fatty acids in animals would also benefit the people who would eventually consume the meat of such animals.